Tim McGraw will be playing at Aaron’s this summer. 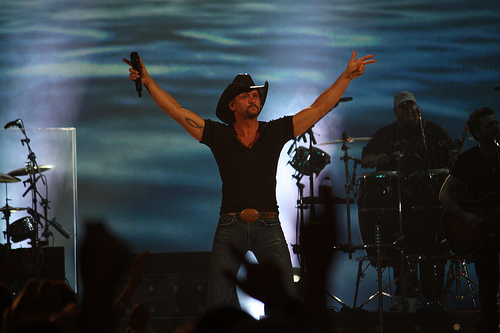 Having recently been named Favorite Country Music Icon at the People’s Choice Awards early this year, you don’t have to wonder why Tim’s upcoming tour is so hotly anticipated. There’s also the fact that his Soul2Soul II Tour of 2006 along side wife Faith Hill is the all-time highest grossing tour in the history of country music, and in the top five among all genres. Tim McGraw is a man who doesn’t dissapoint his fans – pretty impressive when you have as many as he does!

With 11 consecutive albums debuting at No.1 on the Billboard albums charts and 25 singles reaching the top of the Billboard Country Airplay chart, 3 Grammys, 14 Academy of Country Music awards, 11 Country Music Association awards, 10 American Music Awards, and now a total of 3 People’s Choice Awards, his achievements in music alone are mindboggling, not to mention his popularity in TV and Film.